Due to problems with local raper how made intro sound we needed to reupload this because we don't want to pay 1 euro.
86
1
6
0
2
VideosView more
5:25

Ernests Krastiņš is a great person in real life from Ludza (the oldest city in Latvia - 845 years, population 8K people). Vlare he joined on 6th August. I suggested him to. At first he said ‘’This site is boring I have nothing to do there’’. He reposted his 3 videos from his YouTube channel at first: ‘’Iedod kādu santīmu’’ (https://vlare.tv/v/Ys7QYdAD), ‘’Maķitis’’ (https://vlare.tv/v/pf6QeNX6) and ‘’Pēc poham’’ (https://vlare.tv/v/GlxH7m0f). 2 days later he got the genial idea. He becomes for DannyFinest fan to troll other users and he started to write funny comments below videos. Typical structure of his comments: insulting + latvian-russian mix + slang + bad words ‘or sometimes insulting + latvian-russian mix + slang + bad words + threats that he will kill video author ‘or very rarely just something fun ‘or normal comment. So let’s remember all the comments of Ernests Krastiņš
First.
Video: https://vlare.tv/v/r6XSjeIP
Comment:

Translate: This is autism, but so big that’s good and funny.
Second.
Video: https://vlare.tv/v/fSdPepx6
Comment:

Translate: You know what, I will don’t dislike it, idiot, I will do the other way, because I’m not helping to gays and fools, fucking dumbass. I will found you and shoot.
Jim: what
E. K.: fuck you
Third.
Video: https://vlare.tv/v/beuBfm6C
Comment:

Translate: Fucker, suck my dick, fool. DannyFinest is the best!!! Burn in hell, dumbass!!! Bļa if I will found I will at first fuck you then kick you like your mom and nahuj kill and hide your body in the forest. You are only mother fucker, Putin's masturbator.
Fifth.
Video: https://vlare.tv/v/6X5uaQdP
Comment:

Translate: We need to hang nahuj that asshole (Susan Wojcicki), let her die in agony. But you (WarmPatato) we need to send to Siberia where beers will fuck you and you will die like great Kārlis Ulmanis (basically Latvian dictator, but the best leader in the history of Latvia) but in your situation, you will be just a dumbass. Gay fool you. Wish you all the worst.
Seventh.
Video: https://vlare.tv/v/ptQEMNrT
Comment:

Translate: FUCK YOU STUPID MUSLIM!!!!!! KOSOVA IS SERBIA!!!!! DIE IN HELL FUCKER!!!! I STARTED TO HATE YOU FUCKING FOOL!!!!! THERE’S NO ALLAH SATAN FOOKED HIM HARD, I WILL FIND YOU AND SHOOT!!!!!!
(we will skip fun but not so important comments if you want to find them just follow Ernest’s channel)
Fifteenth.
Video: https://vlare.tv/v/wr6Pbfsu
Comment:

Translate: I will cancel you, fucker gay fool fucking!!! I will take my bike to the middle of Syriaaaaaaaaaaaaaaaaa to shoot you with my AK-47. FUCKER GO FUCK YOUR SHEEP STUPID MUSLIM, I KNOW YOU ARE ONLY 118 BUT I HAVE 9 SO DON’T BE RUDE GET YOUR BULLET INTO YOUR HEAD AND GO. FUCKER GAY I WILL FUCK ALL YOUR FAMILY AND PUT CARAWAY IN YOUR ASS!! Go to Siberian or Amazonian burning woods so you will die faster. I will deal with you by knife, by AK-47, by Ukrainian vodka and cigarettes suk blyat.
Nineteenth.
Video: https://vlare.tv/v/3pmn9Y8l (author deleted that comment so minus respect to that cringy content maker)
Comment: 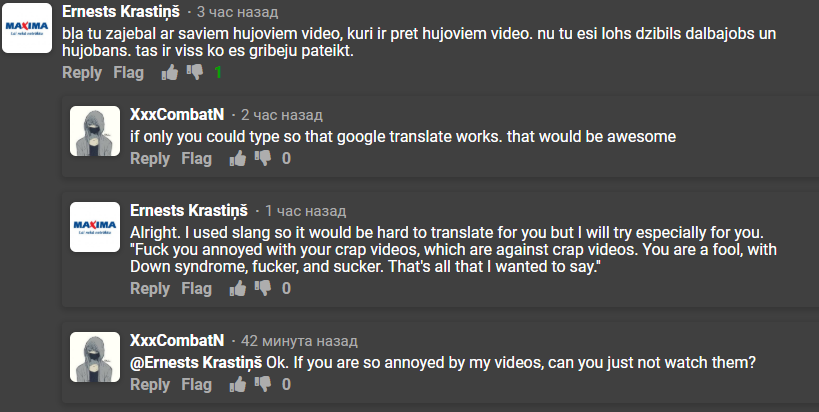 Translate: This was my life before I didn’t kick my monitor.
That was Ernests Krastiņš. The real God of memes in Vlare.